As some of you may know I have been running a sort of intermittent series on the methods of knife use in self defense, according to the approach of reverse grip with edge-in configuration, aka RGEI. Since that first article that dealt with the WHYs of the whole thing, there have been a couple more about the HOWs. Obviously, I liked those quite a bit, but this time the focus is on the gentleman and his video that first got me aware of this characteristic mode of utilizing the tool at hand for the purposes of managing physical conflict.

The gentleman is the one and only James A. Keating, the founder and director of Comtech. To say that Mr. Keating is a progressive-minded practitioner of martial disciplines and combative methods would be a huge understatement, at the very least. I have been following his work for almost 25 years now (whoa, it even took me by surprise!), and his body of knowledge put to public never fails to be incredibly inspiring. I can't even begin to grasp his influence on the people who have had the opportunity to work with him in person. The sort of forward thinking in the relentless pursuit of ever broadening and deepening understanding of one's chosen field of study is always admirable, particularly when done in a such a comprehensive and non judgmental manner, as is the case here.

It is no wonder then that he was the first (to my knowledge, anyway) to propagate the RGEI style of knife combat and present it in an excellent video instructional. The testimony to his being ahead of times is that it first came out on VHS! Now, this volume was/is available in two versions actually. My first exposure was via the tape distributed by the now defunct Paladin Press (ugh, I will never get over it), titled transparently as Reverse Grip Knife Fighting. 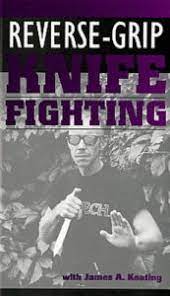 At issue is the same material as originally published by Keating himself, just with an additional intro that talks about the type of knives best suited for the method of work as taught in the video, and their availability. The instructional portion, however, is the same as in the case of Comtech production, titled Drawpoint, which is the moniker I normally use when referring to this system.

The first thing that struck me here was the author's emphasis on the method of carry and deployment of the knife. It is safe to say that prior to that I had seen knife fighting as most other people do - a situation that somehow magically got to the point of facing an opponent with the blade already in and in a fighting stance, with no sense whatsoever about what had preceded it. And Keating does a great job explaining all the pertinent factors about this topic, while pointing out that in the close quarters combat, which is where the RGEI is primarily meant to be applied, the speed of reacting and drawing the weapon plays the main role. 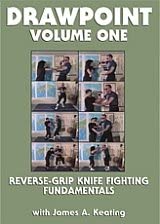 In line with the subtitle of the Drawpoint video, i.e. Knife Fighting Fundamentals, from the deployment we go to learning two basic strikes/offensive techniques (yes, just TWO), but they are worked in such a way that you will thorough understand the mechanics of delivery, footwork to make them doable, applications to make the functional across various situations...in other words, the honest work on integrating the tool and usage method, and fostering actual skill.

But, it doesn't stop there! Remember how I mentioned the emphasis on deployment? Well, Keating goes into some innovative drills that should really hone both the speed, timing, perception and accuracy in drawing the blade and putting it to proper use in a self-protection scenario. And this is probably where the material truly shines, because although several other instructors have formulated their own take on the methods of RGEI use, none have gone anywhere near Keating's approach in terms of developing those attributes.

As you have probably noted from the above picture, the Drawpoint system is presented in a set of three videos, but the second and third are concerned with the reverse grip EDGE-OUT configuration. For that reason, I decided not to review them here. That said, the first volume is really a standalone instructional package, and as such is sufficient in providing the necessary information that will take you a long way in search for the solutions to the problems commonly faced in the real world (think high percentage here), whether it is opposing humans or aggressive animals in similar predicaments.

In conclusion, if you have somehow managed to let James Keating fly under your radar, this is a great way to get introduced to his (astonishing) body of work; if you know the man for his other stuff, this is an excellent to see him at his most straightforward combative mode.

Posted by Dragan Milojevic at 6:21 AM